I really need a dandelion right about now.

With just hours left before Written in My Own Hearts Blood (aka MOBY) book 8 of the Outlander series is published (*Disclaimer—for the majority of readers, as there ARE people who have already received the book, legitimately or via oversight by stores stocking early, and there ARE countries where the book wont come out for a few weeks and…) the self-absorbed, unable-to-accept-an-answer, petulant five-year-old contingent of the internet has come out in some force on some social media sites about Spoilers and Sharing.

Lets just say this about that, shall we? FIRST WORLD PROBLEM 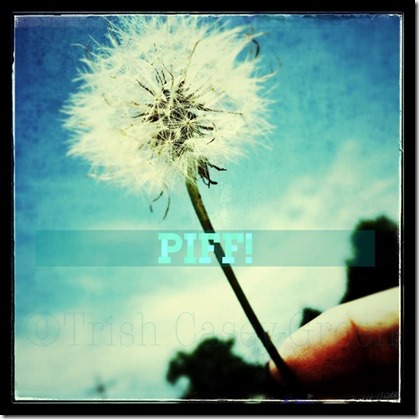 I know that the Red Wedding episode in Game of Thrones is bloody and shocking. I haven’t read the books, I am only on season one, but I am not so put off by this information, these “spoilers”,  that I’ve decided to stop watching. I’ve learned, before even starting into the series that really, George RR Martin shouldn’t be your wedding planner, via social media and yet….

Yes, while the overall issue is exposed, the how we get there and the enjoyment of the show isn’t “spoiled”.  I will just be on my toes, so to speak, and know that I shouldn’t become enamored of any character.  I can use Facebook or Twitter, and if I notice that one of my friends threads is “Going there” I just scroll on.  I MAY see a word or two, I MAY read a sentence, I don’t have to absorb and analyze the posts, and I haven’t asked them to stop speaking of the current season because I am three seasons behind them. No brainer. And of course, applying Caveat Emptor, I should stay off of Twitter on Sunday nights if it bothers me.

I am NOT planning on coming onto FB or Twitter after every Aha Moment and exclaim or carry on—(Diana has assured me she got Jemmy out of the tunnel. I know, Timmy down the well, Jemmy in the tunnel. I just “hear” Claire exclaim “Jesus H. Roosevelt Christ,” I said. “Bloody Timmy’s in the well!” even though that is from ABOSAA)  It’s just not my style, reading has until now been a solitary activity. I may be noticeably missing for a few days. I will not be following or commenting on threads that may get me farther along; I will accept that if I see the trees it doesn’t mean I cant appreciate the forest….

I will scroll down before commenting.  I will honor any policy that is in place, but I will not have a fit if someone doesn’t understand the intricacies of the way a particular site works on a platform they don’t use and they inadvertently share ‘privileged’ information.  Life sucks, yah know?

I have to wonder, seriously, if when people go off the deep end about the small stuff, is it because it is the only part of their spiraling out-of-control life they can manipulate? Is everything else so bad, so out of control that they obsess about things that aren’t worth the energy? The amount of psychic energy that is required to keep up a full-steam frontal attack on something that is truly amounting to nothing is more energy than I have. I am inherently lazy, I guess.

So, I apply empathy, and have to assume that the only reason they would waste 30 miles of gas, and hours of time, three times, to complain about and have the BACK of a picture frame repapered because it didn’t look smooth enough is because the rest of their world is uncontrollable and they need to be able to be in charge of SOMETHING. #Piff!

One thought on “PIFF”