Can I just say This about That?

“Gays, if you want Americans to support gay marriage, why would you use pictures of fat bald men and ugly old ladies in wheelchairs as your poster child?” Erick Erickson

What can be said about this? It’s going around on the internet, and I can’t find an exact link, I don’t know if he was speaking in reference to this couple or not, but really? ( I don’t even know who this idiot is, to be honest, but apparently he is in radio) 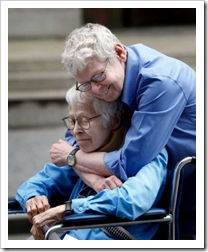 I think this photo is the most telling of images, and a wonderful wedding photo. Not only that, but anyone who can look at these ladies and think they don’t deserve the opportunity to share their love the way that any heterosexual couple can just doesn’t get it.

I think they are better as a poster child for gay marriage than any wild, young, alternative-dressing, flaming, tattooed, punked-out hair styled, over the top couple that set off even the most dense persons Gaydar could ever be, (-not that there’s’ anything wrong with that-) because they are saying to America, “LOOK at us, we look and act and love and hurt and age like you. We already live next to you, and work with you. You know us, how can you say we shouldn’t have the right to what you have?”  You can easily imagine these ladies as being your neighbors– they don’t offend delicate sensibilities. (There are some fabulous, wonderful, happy, goosebump-giving wedding photos of couples of this sort on their wedding day as well at the link above, and all over the internet. I love wedding photos.)

Many of us will reach a time when old, fat, bald or disabled identifies us, and if we still have a spouse, and if we can be as happy as these ladies are after being together 23 years…then we will be lucky, indeed.

When I was a child in New York, the little girl across the street moved away and there went the annual Easter Egg hunt that had been orchestrated from their driveway in the past. I hoped for a new family with children, of course. Instead, “the two ladies”  (I’ll describe them as mature. Remember, I was 6 at the time, they could have been anywhere from 30 to 70 years old) moved in, complete with a number of yapping dogs, and they were ‘together’, although I didn’t understand it all, and lived there for a few years.

My dear cousin, who died a few years back at 93, had for decades as apartment neighbors down the hall,  two elderly male ‘roommates’  who she called “the men”. They  were great friends and companions to her. To think that today, these couples would be able to be free about who they were and make it all legal…

I’m a woman who is happily married to a man for almost 10 years. I found and fell in love with him, and I didn’t have to wonder about whether or not I could become his spouse. I would wish that for any human— to find love, and to be able to show the world their love and commitment via marriage if they so choose.  (And so many heterosexual couples CHOOSE not to marry…..)

I would love to get a call from a certain brother of mine, telling me such happy news.  Actually, I would probably be satisfied if said brother called from time to time to talk about the weather, but I digress. (If he called to say he was moving back to New York so he could get married and that the weather be damned, well…

A video was making the rounds a few years back, and it came around again, (but has since been removed by Youtube, so I will not link it to this blog, respecting the copyright owner) but if you saw it, you’d remember it.

A precocious little boy in a red shirt was introduced to two husbands. He quickly deciphers, and breaks down into bite-sized pieces this new information, (husbands are boys, and wives are girls so you two are both husbands) feeds back to the couple the things he found relevant (that means you love each other, and you are much alike) and then suggests they go play ping pong with him.

If only the adults in this world could be as sensible.

One thought on “Can I just say This about That?”