Part ONE—Merry Christmas!!!! Thanks for taking this journey with me these past 25 days!

I hope I have made you smile! 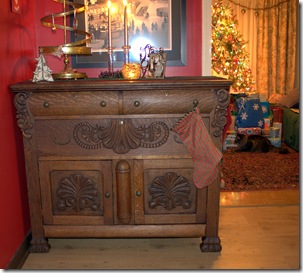 This is one of my Christmas presents!

My husband refinished (and enhanced structurally) this credenza, that was owned by my great-great grandparents. I don’t know how old it is, but they got married in 1890; I would think maybe they bought it when they moved to Staten Island from Brooklyn and bought the house on Amboy Road. I inherited it in 1985 or so, when my Great Aunt Gene was moving out of the house to retire to South Carolina/Florida.

It moved from Ellicott Place to Colonial Heights with me in 2002, but when we bought our house in 2003, it moved into the garage as it was no longer willing to stay upright and hold stuff. Since then, I have been waiting patiently (smile) for Timmy to get up the nerve to tackle this project! I told him I wanted it for Christmas this year, and that seems to have been the push he needed! 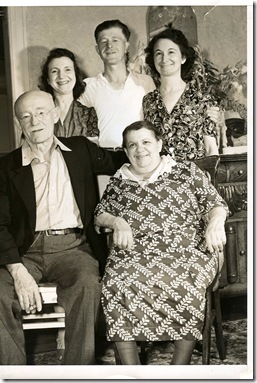 This picture shows my great-great grandparents, Soloman and Rachel Frank, seated, at their 50th Wedding anniversary party, with a friend of the family, son in law Everett and my great Aunt Gene, sister of my great Grandmother Miriam.

I hope everyone got the gifts of their dreams!!!

Your answers were fun and varied, and I am sorry to say I haven’t tallied it all up…will do for next year!! Here are MY answers!

and 10….a song that you couldn’t make fit in the above!

In an old city bar
That is never too far
From the places that gather
The dreams that have been
In the safety of night
With its old neon light
It beckons to strangers
And they always come in
And the snow it was falling
The neon was calling
The music was low
And the night
Christmas Eve
And here was the danger
That even with strangers
Inside of this night
It’s easier to believe
Then the door opened wide
And a child came inside
That no one in the bar
Had seen there before
And he asked did we know
That outside in the snow
That someone was lost
Standing outside our door
Then the bartender gazed
Through the smoke and the haze
Through the window and ice
To a corner streetlight
Where standing alone
By a broken pay phone
Was a girl the child said
Could no longer get home
And the snow it was falling
The neon was calling
The bartender turned
And said, not that I care
But how would you know this?
The child said I’ve noticed
If one could be home
They’d be all ready there
Then the bartender came out from behind the bar
And in all of his life he was never that far
And he did something else that he thought no one saw
When he took all the cash from the register drawer
Then he followed the child to the girl cross the street
And we watched from the bar as they started to speak
Then he called for a cab and he said J.F.K.
Put the girl in the cab and the cab drove away
And we saw in his hand
That the cash was all gone
From the light that she had wished upon
If you want to arrange it
This world you can change it
If we could somehow make this
Christmas thing last
By helping a neighbor
Or even a stranger
And to know who needs help
You need only just ask
Then he looked for the child
But the child wasn’t there
Just the wind and the snow
Waltzing dreams through the air
So he walked back inside
Somehow different I think
For the rest of the night
No one paid for a drink
And the cynics will say
That some neighborhood kid
Wandered in on some bums
In the world where they hid
But they weren’t there
So they couldn’t see
By an old neon star
On that night, Christmas Eve
When the snow it was falling
The neon was calling
And in case you should wonder
In case you should care
Why we’re on our own
Never went home
On that night of all nights
We were already there
THEN ALL AT ONCE INSIDE THAT NIGHT
HE SAW IT ALL SO CLEAR
THE ANSWER THAT HE SOUGHT SO LONG
HAD ALWAYS BEEN SO NEAR
IT’S EVERY GIFT THAT SOMEONE GIVES
EXPECTING NOTHING BACK
IT’S EVERY KINDNESS THAT WE DO
EACH SIMPLE LITTLE ACT