ADAPT: to change your behavior so that it is easier to live in a particular place or situation

: to change (something) so that it functions better or is better suited for a purpose

: to change (a movie, book, play, etc.) so that it can be presented in another form

So, this book I love is becoming a TV series tonight (not a movie, not a mini-series, but a full on, 16 episode first season series!) I have had the pleasure of reading the books for over a decade,  seeing the first episode during the last week, and conversing via social media for  the past year with author, costumer and actors…. and you know what?

THEY are right and you may be wrong.

Outlander, the first of at last count an eight big-book series, (with a number of smaller works that go along with them) written by Diana Gabaldon, premieres as a TV show on Starz tonight.  The things that are IMPORTANT will be there. Possibly in a different order. (Patience, young grasshopper!) I have faith in this, because Ron D. Moore tells us his job as show runner is to not mess up his wife Terry’s favorite book.

The things that CAN be done will be done, and things that are important will stay. And if they aren’t still there, well maybe we are the ones who have created something in our heads that isn’t there. Seriously. 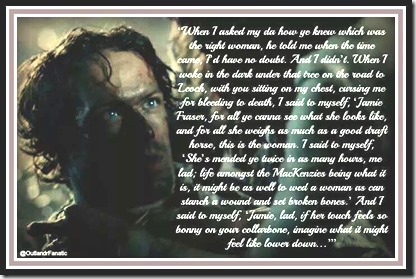 As Ansel Adams said, There are always two people in every picture: the photographer and the viewer.

I would think that this is at least as true in the written word. When those words are then translated by hundreds of hard working actors, directors, screenwriters, costumers and set designers, the number of voices and visions might possibly deafen.

Each of us brings to any work of art, indeed, to any aspect of life, the sum total of all of our experiences. Either in the creating of said work, or in the consuming of it. That we have all had different life experiences doesn’t seem odd, and accordingly, our reading of words on a page must be influenced by different things.

That doesn’t mean that any interpretation on screen is WRONG. It just may be different than what YOU brought to the reading of it and what you took from it.

After a year of having the supreme honor of hovering about the edges of this creative endeavor—following Twitter and Facebook conversations with writers and costumers and actors alike, I have to say that I think they’ve got it in hand. Trust them.

In the 8,000+ pages where he lives, the character Jamie has commented a number of times on his wife Claire’s substantial bottom.  That doesn’t actually mean that Claire’s rear aspect is overly large; indeed it could be read, as I did, as simple pillow-talk and playful behavior between Jamie and Claire. It also has absolutely no importance to the plot. For example, said plump ass never gets stuck in a doorway, blocking access for some thief in the night, which then causes a different outcome. If the big booty in question was required for the story, I’d be sorry to see them not get it right. (If you read the actual physical description of Claire, she is supposed to be about 130 lbs., and shorter than the actress portraying her. Diana Gabaldon put the height issue to bed quickly by suggesting that the only option was to find a less perfect actress or cut Cait’s feet off…)  Perhaps Jamie is simply a fan of Sir Mix-a-Lot?

As it is, I have to say that the ass, as shown, is a lovely round thing and how dare we as viewers denigrate an actor who is willing to bare all for the story? (Odd, isn’t it, to be admiring my ‘friend’ Cait’s backside, huh? I can’t imagine how I will be feeling when I get to see my other ‘friend’ Sam’s ass;– we have been assured he has a fine one, by the author Herself!)

Similarly, Claire’s eye color, a great device in storytelling, didn’t actually accomplish anything other than being a way of description. At no point does the heroine get caught because someone noticed her odd eye color and realized she was skulking about where she didn’t belong, thereby changing the story. Diana writes long books. Gorgeous, evocative description is obviously a part. And the camera is now going to create for us proof of how wonderfully deep and complex Claire may be, Caitrona Balfe’s eye color and butt size be damned. 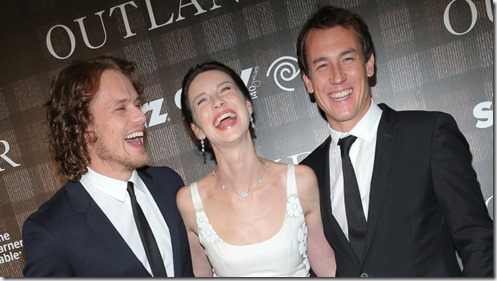 However, Claire-hair WILL stay, and I think that a fine thing and a character of it’s own.

8,000 pages, give or take depending on your reading device, and the story isn’t finished. We, the long-time readers, can not continue to nit-pick every utterance or camera angle or choice made while ADAPTING the written word for the visual medium of TV. We are talking about taking one type of art and turning it into another type of art.

It is entirely possible some scene that to you is incredibly important, because of what you brought to the reading of it, may be cut. It is going to happen. What we have to be thankful for is that the over all shape of the story stays. That the intent and love of the story remains intact. We can hope that many more people fall in love with these characters and that that the entire cast and crew remains committed to making a quality product.

We need to adapt because there are 25 million readers who have 25 million life stories, 25 million visions of Jamie, or of the size of Lallybroch or the size of Murtagh in relation to Dougal, or who think Tobias Menzies doesn’t have Frank’s smile.

That for all these years, YOU have considered Jamie Fraser to be the size of Hercules with a Ronald Mc Donald wig on his head in no way makes the color red they came up with for his hair incorrect. If his hair isn’t long enough for your vision, then adjust your vision. This is the character, Jamie Fraser, played by the actor, Sam Heughan.

Filming is almost finished for the first season, so stop complaining, will you? Jamie will be imbued with Sam as much as Sam will be imbued with Jamie.  (By the numbers, Sam is an inch shorter and a few pounds shy of the actual book description, your fantasy man notwithstanding.)

But we’ve already had that Conversation , haven’t we?      Ad infinitum.

There have been some absolutely wonderful reviews of Outlander so far….  Here is Rotten Tomatoes, which catalogs reviews.

Yes, books are different than TV and movies, and usually, the book is better.  And that will probably be the case, overall, here. But I am watching this as a companion to the books, not as a replacement. I can keep in my book world the images I have created and STILL enjoy the visual ADAPTATION immensely.

PS. Yes, young Roger IS in the manse. We just don’t SEE him in the first episode. Did you SEE how big that house is? He’s a tiny boy asleep on a chair, for goodness sake!  Dinna fash, aye?

pps, and I am editing as I re-read…..sorry about spelling errors! Dang Auto-correct strikes again!

Interesting reading about the costuming.

A nice review, episode 106, about Adaptation.

15 thoughts on “Adaptations— A primer”